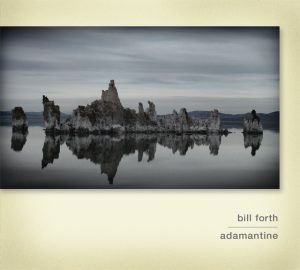 Adamandine is only available as a physical CD, it can be purchased through Amazon.

Whilst California-based guitarist Bill Forth hasn’t exactly got a huge discography under his belt, he’ll be known to some King Crimson fans as one half of the group Ten Seconds, whose self-titled debut featuring Robert Fripp was released on DGM in 1996. In more recent times Forth has been heard as part of Lives Of The Saints – his electro-ambient duo with Ronan Chris Murphy. Their appearance was the highlight of the Destroying Silence sampler a few years ago.

Murphy produces and plays here also and whilst similar elements to Lives Of The Saints are detectable, Forth’s deep-space atmospherics are spread much further over a vast and intricately detailed canvas that alternates between poles of exquisite illumination and washes of encroaching darkness.