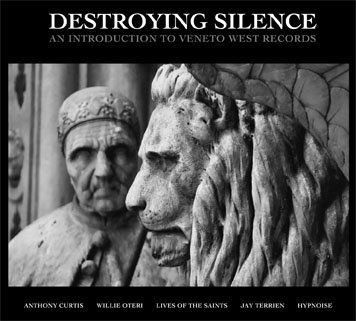 “Destroying Silence: An introduction to Veneto West Records:” is a compilation distributed exclusively through King Crimson’s distribution company Inner Knot, featuring Anthony Curtis, Willie Oteri, Lives of the Saints (Ronan Chris Murphy with Bill Forth), Jay Terrien and Italian band Hypnoise. Many of these artists are supported on this 13 song CD by some of the best names in Progressive rock including Tony Levin (5 songs), Pat Mastelotto (5 Songs) Mike Keneally (4 songs) Jeff Gauther (2 songs) and many others.

Purchase the CD through Inner Knot / DGM for only $5

How to Destroy Silence: An interesting proposition by Ronan Chris Murphy, prestigious musician, and one of the better known producers and sonic manipulators in the world. An ambitious objective, if we consider that in silence there is the sense of things, nature, and ourselves, but Murphy knows what he is doing and organizes a beautiful CD compilation with the jewels from the Veneto West stable of artists.
Veneto West is a brand new label founded by Ronan, inspired by labels such as ECM and distributed by Inner knot. With this compilation as the labels introduction to the world, this looks to be a very promising new label. Even with such an exceptional set of artists, it is more than the individual names on the album, it’s the intoxicating atmosphere of the work. A mix of progressive, jazz rock, and sonic research, with a punk spirit and Zappa-esque philosophyÊcombined with skill and ability. This is the role of a good producer, to allow artistic freedom while pushing the creativity of every single artist to find that unique element, that unique beacon on the sea of international discography. The artists included in “Destroying Silence” are an interesting calling card. Eccentric guitarist Anthony Curtis takes advantage of a collaboration with Tony Levin and Mike Keneally on three tracks of cool jazz-rock which is reminiscent of a more psychedelic free-form Crimson. Another great guitarist on Veneto WestÕs team is Willie Oteri: with the same band. (but with Pat Mastelotto on drums in place of Lewis Pragasam), creates rock-jazz from the bitter and rough tones, something like Miles-esque atmospheres to groovy Zeppelin sounds. Also fascinating is the “Live Of The Saints” project, with Murphy and Bill Forth on guitars, kind of an updated version of Fripp & Eno, an ambient music rich in surrealistic and grotesque textures. Jay Terrien is a curious bass player, who in trio with Mastelotto and Murphy gives us a techno-rock that is both audacious and futuristic, made of sonorous spider webs and endless loops. A great end to the album is one of Italy’s most promising bands, Hypnoise: with their second album soon to be released on Veneto West Records, their psychedelic prog is ready to get new, musically adept, fans as testified by two intense and bold songs on “Destroying Silence.” Veneto West is not only a label: it is an arena of artists, and area of exchange, and a crossroads of new languages. Welcome.

Music every which way but bad

Sampler albums designed to display the wares of a particular label or studio can make for difficult listening. Should the compiler opt for a diverse selection it can all sound rather bitty or thematically disjointed. Then again too much of the same and it looks like a one-trick pony.

Destroying Silence pulls off a coup in that although the music hails from several different artists there’s enough of a common thread moving through each, that it makes for a satisfying listen.

Having grown up in the 80s Washington DC music scene and inspired by the DIY-ethic promoted by the punk movement, Ronan Chris Murphy went on to work as a producer and engineer with bands and musicians as diverse as Steve Morse, King Crimson and Cuban pianist Chucho Valdes. More recently he has established his own label, Veneto West Records and Destroying Silence is its first showreel.

Anthony Curtis opens the album with a two tracks – the explosive “Gallabalba” and a darker meditation, “Ruins”. The first is full of howling guitars barking and scraping over a time signature that shifts around the bar like a boxer round the ring. Some fantastic left hooks are served up by Tony Levin on Stick and the delightfully unpredictable drumming of Lewis Pragasam.

Levin returns on tracks by another guitarist Willie Oteri. He’s joined by fellow Crim Pat Mastelotto who provides the percussive commentary. The Oteri tracks are strong forays into a spacey, fluid rock enabling the players to stretch and flex.

Based around an insistent pulse reminiscent of “Once In A Lifetime” by Talking Heads, “Ephraim Walks In”, Oteri’s fiery playing is tempered by some darting muted trumpet courtesy of Emphraim Owens and the atmospheric vintage chimes of Fender Rhodes piano courtesy of ex-Zappa man, Mike Kenneally.

Mastelotto returns for a selection from Jay Terrien’s powerful album, All The Dolls In The Same Place, whilst Hypnoise offer a welcome vocal outing with the Floyd-like epic “The Ocean.”

The predominant rock-orientated feel is offset by some interesting ambient-style delving from Lives Of The Saints – Murphy himself and Bill Forth (best known for his work with Ten Seconds). The duo offer up the most haunting track from the album, “The Most Beautiful Lie You Ever Told”, – a smouldering soundscape that slowly caresses the edge of feedback, suggestive in places of Rafael Toral’s work in a similar field. A whole album rather than the three short tracks here would be welcome.

Murphy states that “the goal of the label is to foster high brow music with a punk rock spirit, presented with high production values.” Well, he manages that and a lot more besides.